I've been doing some performance analysis of EVE running under Wine on OS X. My main test cases are a series of scenes run with the EVE Probe - our internal benchmarking tool. This is far more convenient than running the full EVE client, as it focuses purely on the graphics performance and does not require any user input. 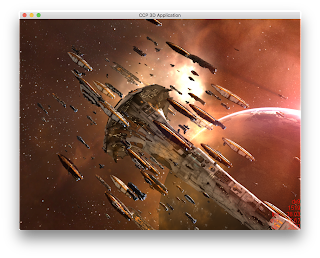 One thing I tried was to build Wine Staging. On its own, that did not really change anything. Turning on CSMT, on the other hand, made quite a difference, taking the average frame time down by 30% for the test scene I used. While the performance boost was significant there were also significant glitches in the rendering, with parts of the scene flickering in and out. Too bad - it means I can't consider this yet for EVE, but I will monitor the progress of this.

Apple has the very useful OpenGL profiler available for download. I tried running one of the simpler scenes under the profiler to capture statistics on the OpenGL calls made. 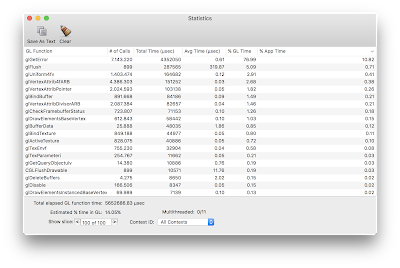 The profiler can also capture a full trace of all OpenGL calls made by an application. Looking at the full trace can be interesting, if somewhat daunting. A minute long capture of this fairly simple scene yields 5.8M function calls. I plan to do further tests later on, with ultra simple scenes to better understand how DirectX calls get translated to OpenGL calls.

Apple's OpenGL implementation has something called the multithreaded OpenGL engine. This needs to enabled explicitly. The multithreaded OpenGL engine then creates a worker thread and transfers some of its calculations to that thread. On a multicore system (as Macs are today), this allows internal OpenGL calculations performed on the CPU to act in parallel with Wine, improving performance.

It took me a little while to figure out where to put the code to enable this, and it didn't help that the CGLEnable function did not complain when I accidentally passed in an invalid context. Eventually I added the following lines in dlls/winemac.drv/opengl.c, in the function create_context: 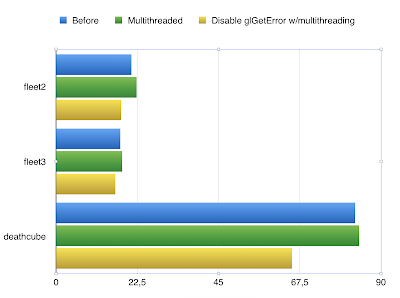 I'm just starting to get to know the Wine code base and it's hard to say what optimization opportunities are in there. One thing is for certain, though, that I will spend a lot more time analyzing it and trying out different things, both in our codebase as well as Wine.

November 10, 2017
Learning new things is important for every developer. I've mentioned  this before, and in the spirit of doing just that, I've started a somewhat ambitious project. I want to do a large-scale simulation, using  Elixir  and Go , coupled with a physics simulation in C++. I've never done anything in Elixir before, and only played a little bit with Go, but I figure,  how hard can it be ? Exsim I've dubbed this project exsim - it's a simulation done in Elixir. Someday I'll think about a more catchy name - for now I'm just focusing on the technical bits. Here's an overview of the system as I see it today: exsim  sits at the heart of it - this is the main server, implemented in Elixir. exsim-physics  is the physics simulation. It is implemented in C++, using the Bullet physics library. exsim-physics-viewer  is a simple viewer for the state of the physics simulation, written in Go. exsim-bot  is a bot for testing exsim, written in Go.
Post a Comment
Read more

September 23, 2017
Xmpp is an open standard for messaging and presence, used for instant messaging systems. It is also used for chat systems in several games, most notably League of Legends made by Riot Games. Xmpp is an xml based protocol. Normally you work with xml documents - with Xmpp you work with a stream of xml elements, or stanzas - see https://tools.ietf.org/html/rfc3920 for the full definitions of these concepts. This has some implications on how best to work with the xml. To experiment with Xmpp, let's start by installing a chat server based on Xmpp and start interacting with it. For my purposes I've chosen Prosody - it's nice and simple to install, especially on macOS with Homebrew : brew tap prosody/prosody brew install prosody Start the server with prosodyctl - you may need to edit the configuration file (/usr/local/etc/prosody/prosody.cfg.lua on the Mac), adding entries for prosody_user and pidfile. Once the server is up and running we can start poking at it
Post a Comment
Read more